Culturally beginning back in the 9th Century BC and flourishing historically, militarily, architecturally and artistically in 5th Century BC with the rise of the Roman Empire, Italy has, throughout time, set high standards for the Western civilized world.  Today, traveling thoughout the country, one will see examples of eduring Italian craftsmanship, artistry and design innovation, in different medias, that span over 2,000 years of history including:
The legacy does not stop there.  As part of the modern contribution to the history of Italian innovative design and quality craftsmanship is Artemide Lighting (http://www.artemide.net/) based in Pregnana Milanese, a suburb of Milan.  Since 1958, this award winning company has set the pace for modern lighting design and has grown into an international powerhouse with 16 subsidiaries and affiliated companies, 35 exclusive distributors and production centers in Italy, France, Germany, the USA, Hungary and the Czech Republic.  So innovative and important contributions to design, pieces have been included in permanent museum collections at Musée des Arts Décoratifs de Montreal, The Metropolitan Museum of Art in New York, The Museum of Modern Art in New York and The Galleria Nazionale d'Arte Moderna in Rome.
Artemide's most iconic and famous designs are the Tizio table lamp designed by Richard Sapper in 1972 and the Tolomeo table lamp designed by Michele De Lucchi and Giancarlo Fassina in 1986 (both pictured below). 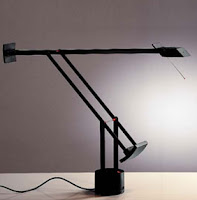 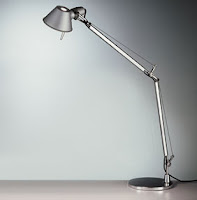 ﻿
﻿
As time marches forward, so does Artemide.  The company continues to develop new pieces that are forward thinking in aesthetic design.  Like these new designs: 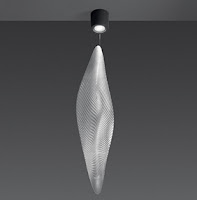 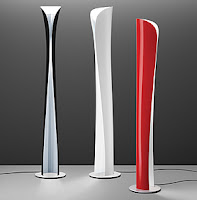 Soffione Wall/Ceiling Fixture designed by Michele De Lucchi in white handblown glass.
As a leader in the lighting industry, Artemide directly addresses the concern about the environment by using technology.   Over the last 10 years, all industries throughout the world have made the protection of the planet a top priority with energy consumption one of the most discussed areas.  The most recent major development relates to an item that we come into contact everyday, the lightbuld.  In 2007 George W Bush's signed the Energy Independence and Security Act, which phases out the use of traditional, incandescent light bulbs between 40 watts and 150 watts over a two-year period.  California enacted this law on January 1, 2011.  The rest of the country will start this program in 2012 with many other countries following suit.  Artemide's response was almost immideate.  Within 2 and a half years, the company turned to LED technology as a new alternative to traditional bulbs.  New and existing lines, like the Tizio and Tolomeo collections, are designed and manufactured in both LED or standard incandscent versions.
For thousands of years, Italy has made great impressions on the material world by creating  amazing works of art, timeless and grand architecture and innovative goods all with a consistant level of craftsmanship.  Artemide Lighting continues this legacy in a truly progressive way.  So the next time you are in the market to purchase modern lighting, turn to Artemide Lighting because you can not go wrong with Italian design.
Posted by HERMOGENO DESIGNS at 6:53 PM 1 comment: